On Friday, Sotheby’s announced one of the top lots for its contemporary art evening auction: Francis Bacon’s 1981 Triptych Inspired by the Oresteia of Aeschylus, a large-scale, three-part oil painting that will carry an estimate of $60 million. The work is inspired by ancient scholar Aeschylus’s Greek tragedies dated from the 5th century B.C. and will be offered at the house on May 13 in New York.

Triptych comes from the collection of Hans Rasmus Astrup, a Norwegian business tycoon who ranks on ARTnews’s Top 200 Collectors list and the heir to his family’s real-estate and shipping conglomerate, as well as the founder of a private museum in Oslo that houses his collection of over 1,300 modern and contemporary works. The proceeds of the sale will go to the benefit of the consignor’s family foundation, which provides funding for the museum’s maintenance and development. 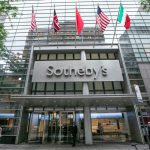 In a release announcing the sale, Alex Branczik, head of contemporary art for Sotheby’s Europe, called Bacon “the great tragedian of his age,” emphasizing the artist’s capacity to grapple with his subjects “so that timeless power of the Ancient Greek genre is brought to bear on the human condition in the 20th century.”

Bacon, who was never formally trained as a painter, is considered one of the foremost British artists of the postwar era. His work frequently features semi-abstracted scenes of carnage, and he claimed influence from Picasso’s early work featuring religious imagery, as well as photography’s ability to capture to the uncanny.

In 2013, another of Bacon’s colossal triptychs, Three Studies of Lucian Freud from 1969, sold in a New York Christie’s evening sale setting the artist’s current auction record at $142 million. The chance for the masterpiece-level Triptych to contend in Sotheby’s May auction will offer another potentially historic moment for the contemporary category.

Be the first to comment on "Sotheby’s to Offer Storied $60 M. Francis Bacon Triptych in New York – ARTnews.com"